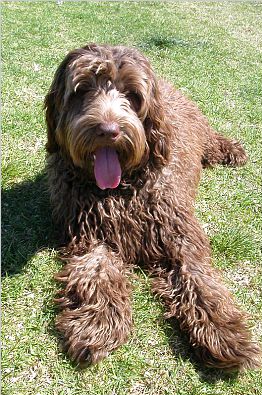 The Labradoodle dog breed is a cross between a Labrador Retriever and a Poodle. Like his parent breeds, the Labradoodle is an intelligent, friendly, and moderately active dog. They were originally bred in an attempt to create a hypoallergenic guide dog, and they have since become popular pets. Let us know more about the history and characteristics of a Labradoodle.

History of the Labradoodle Breed

It wain in the mid-1970’s when the Australian Guide Dog Association received an inquiry from a blind lady in Hawaii who was requesting a guide dog that would not cause her allergies to flare up. The lady chose Australia because of the relaxed Quarantine requirement because dogs exported to Hawaii are able to get off the plane and go straight home with no quarantine. However, the Australian Guide Dog Association had nothing to offer her that’s why they’ve set a task to try to breed such a dog.

To be able to achieve a hypoallergenic dog, they needed to breed Labradors, which was they breed they chose, to a dog that was already non-shedding. That’s why they chose the Standard Poodle. The association sourced an imported white dog from Sweden and the one in charge of the operation was Mr. Wally Conren.

When the first litter was born, it was called the Labrador-Poodle and so the Labradoodle was born. After two years, a man who bred puppies for pet shops began breeding these rather handsome Labradoodles. But he went further and bred Labradoodle back to poodle and Labradoodle to Labradoodle. However, he kept few records. The main aim of the man was to breed lovely natured family pets. He continued breeding first and second generation Labradoodles for a few years before he retired from breeding dogs.

The success of the Guide Dog Association was minimal because they also never recognized the mutated gene that would go on to develop the hypoallergenic Labradoodle we have today. But the interest in the Labradoodle eventually became apparent and breeders in Australia began to breed these dogs and after a few years, they were able to develop the Australian Labradoodle we all know and love today.

Characteristics of a Labradoodle The Labradoodle is a hybrid dog that comes in three size variations which depend on the size of the Poodle used for the first-generation breeding. The sizes are Standard, Medium, and Miniature.

They can have one of a range of coat types and the desired length of their coats is 4 to 6 inches. It has two major types of coats which are the Fleece coat and the Wool coat. Fleece has a soft textured fleecy feeling while wool has a dense wool feel and is mild to very curly.

Caring for a Labradoodle

A Labradoodle can easily adapt to any setting, however, it is not recommended for apartments. It’s because they require about 30 to 60 minutes of exercise per day that’s why it’s better that they lie in a home with a fenced yard.

Labradoodles are non-to low shedders and their grooming requirements vary depending on the length and the type of coat they have. But in general, you should brush them once or twice a week and clip and trim them every six to eight weeks to maintain their coat clean. It’s also best to bathe them only when necessary because their coats do not have a noticeable doggy odor.

When feeding a Labradoodle, the recommended daily amount of food is 1 to 2.5 cups of high-quality dry food divided into two meals a day. The amount of food will depend on your dog’s age, size, build, activity level and metabolism.

So, if you want a pet dog but you’re suffering from allergies, maybe you can try having a hypoallergenic Labradoodle as a pet. And if you have children at home, they can also be affectionate and gentle companions for them.