We are well known for being a nation of dog lovers, but even the most patient amongst us are prone to lose patience when our best friend crosses the line. The key to enjoying your dog is to set limits so you know who the boss is. In a word: obedience. An … Read more Taking your dog on vacation with you is fun and relieves the worry of not knowing what is wrong with him while you’re away. But you want to do it right. Planes and cars are not designed for dogs. In addition, one must know what awaits you at your destination. Taking the time to plan your trip calmly will allow you to have a great time on your rest days, therefore, here are some tips to do so. Meanwhile, click the link to visit the best real money online casinos.

It is normal to feel bad about having to put your dog in a cage. No one likes to be caged. But do not project your feelings to your dog. The dogs do not mind the cage and many even feel safer in it. When given a holiday, traveling or taking a trip is one of the first ideas that enters a person’s mind, especially for single people. But for those parenting a pet, sometimes it becomes a dilemma – they want to travel with their pet because it lessens the worry of not knowing what’s … Read more Summers are toughest weather, for human and also for our pets. The intense heat can not only reduce appetite and desire to move, but can also have more serious consequences, such as the dreaded heat stroke. In this article, we are providing you with some tips to protect your dog from the … Read more Once, there was an adorable German shepherd puppy named Thunder, whom we have taken care of. Thunder was a guide dog in training to help blind people. By the way, we are what you call Puppy Raisers: we are volunteers whose job is to take a puppy into our homes when they … Read more It’s hard to know what, how often and how much to feed your dog. Read on for answers to the most common feeding questions for dogs in general. The following pages have The Puppy Place’ answers to dog-specific feeding questions. HOW MUCH SHOULD I FEED MY DOG? Feeding guidelines vary depending on … Read more Of all naturally-driven or instinctive behaviors, eating food is obviously among the most important. Dogs normally do not have to learn how to eat—from the time they are born and are compelled to seek their mothers’ breast, they survive by seeking food. In pet dogs, however, eating behavior can be associated with … Read more 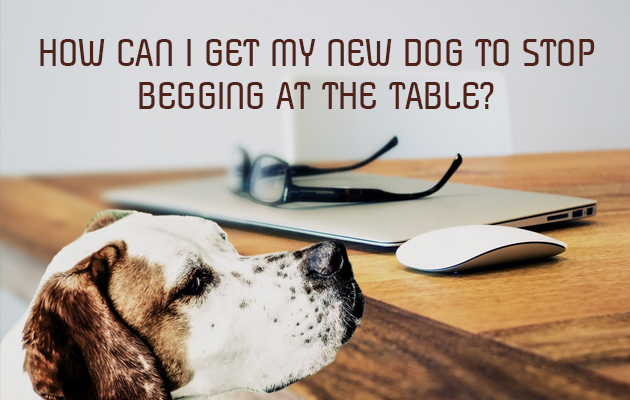 Begging at the table can be something your dog brought with him from his previous home, and it is understandably a behavior that some find unacceptable.

If you’re not used to having a wet nose poking at your leg under the table or, worse, a pair of deep brown eyes staring pitifully up at you as you enjoy your pasta, it is possible to change the begging habit. Let’s start with easy solutions and progress to those that may require more effort on your part.

The most foolproof solution is to restrict your dog from the kitchen or dining area during meals. A simple baby gate in the kitchen doorway will solve your problem, unless your dog has resorted to whining or barking at the dinner table. In addition, it may be helpful to feed your dog before you feed yourself, just in case the begging is actually driven by hunger. Many dogs probably don’t know the meaning of the word!

The longest-term solution is known as “extinction”: in order to extinguish a behavior (and begging is a good example) you must remove every trace of reinforcement or reward. In other words, not only must you stop giving your dog any food from the dinner table, you must also try to stop dropping any surprises onto the floor. (Wasn’t it Freud who suggested “there are no accidents”?) Although extinction takes longer than other methods for stopping an undesired behavior, it tends to endure, as long as reinforcement is no longer given. They say that dogs are a human’s best friend. They join us for walks, help us stay active by dragging us to play catch with them.They get really excited to see us when we come back home from a tiring day at work, they lick our faces and express their love very … Read more